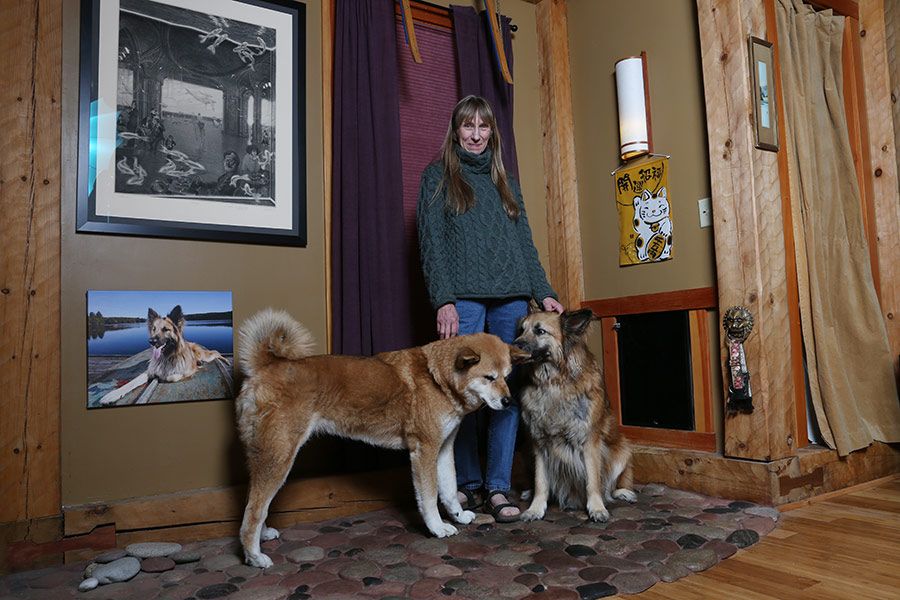 On the contrary, her extensive career shooting subjects including, CEOs, taxi drivers, movie stars and many other personalities has been an endless source of photographic inspiration for work that appears in a wide variety of publications and ads.

But given the choice of spending the day in the New Hampshire woods with her elegant and sweet Akita and Chinook dogs and going to a party where she could possibly be considered a curiosity ... well, the dogs are likely to win.

She spends her personal time dogsledding, hiking and training Fenikkusu and Kalitan. These dogs and other animals in the Hill family inspired Britain's interests in health, genetics, ethics in breeding and promoting responsible animal ownership.

Luckily, in photography she doesn't have to make the choice. She was able to show the stillness of a normally frantic Martin Scorsese in an editing room, just as she was to capture a pair of dalmatians uncharacteristically still themselves on a New York City roof ... the scenes are always different.

Britain's work time is spent split between the human world and the world of animals, finding aspects that others might not see. With both, she is playful, impish - she discourages interference but embraces collaboration.

A network founder, a cow, a musician, a dolphin, or a dog may each contribute to her peculiar vision. A shoot, partially prepared during an hour spent setting up before her subjects arrive, can vary tremendously, but at its core is attention to the ambient light and to battling nature to manufacture her own light.

The picture begins with researching her subjects, scouting locations, reading their books or watching their films. Then it's about the fun - regardless of whether it's a horse or a head of state.

"They're just people, you have to treat them like people," she says.

"Unlike animals, who you have to treat extra special."

All that's left is the shoot.